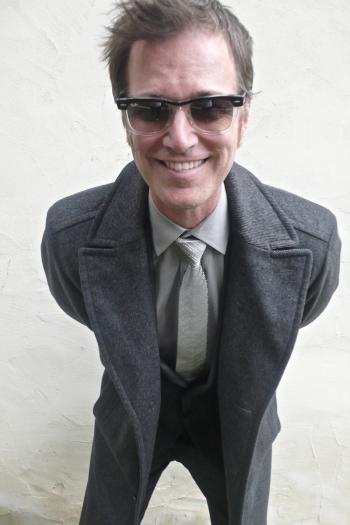 @danwilsonmusic
Dan Wilson is a singer, multi-instrumentalist, Grammy-winning songwriter and producer. He is a solo recording artist and performer and is also known for his singing and songwriting with the band Semisonic. Before that, he played guitar and sang for psychedelic folk-rockers Trip Shakespeare. Currently, Wilson is perhaps best known for his co-writing and collaborations with other artists. He contributed three songs to the 2011 album 21 by UK singer songwriter Adele, which has had the longest Top 5 run in history on the Billboard Album Chart. 21 is nominated for the 2012 Grammy Award for Album of the Year. Wilson has collaborated with a wide range of other artists including The Band Perry, Rivers Cuomo of Weezer, Josh Groban, Nas, Jason Mraz, Keith Urban, Carole King, James Morrison, Gin Wigmore, Missy Higgins, Gabe Dixon, Mike Doughty, KT Tunstall, Audrae Mae, Nicole Atkins, Rachael Yamagata and many others.

As a member of the beloved and influential alternative band Trip Shakespeare in the late 80?s and early ’90s, Wilson relentlessly toured the indie rock circuit with the group. The band recorded four albums, two of them for A&M Records. During this time Trip Shakespeare forged a psychedelic-influenced folk-rock style and became known by fans for sets that began with tightly structured rock songs but ended with extended and outrageous improvised jams. Trip Shakespeare are acknowledged as an influence by Phish and other members of the jam-band movement which arose in the 1990s.

Wilson’s next band, Semisonic, was formed when Trip Shakespeare announced an open-ended hiatus from performing (a hiatus which continues to this day.) With the new band, Wilson emerged as a hit songwriter and front man. Semisonic’s second album, “Feeling Strangely Fine,” sold over 2 million copies worldwide and remains a touchstone of late-90?s alternative rock. “Closing Time,” the band’s biggest hit, was ubiquitous around the world and remains a familiar and recurrent radio presence in many countries. “Secret Smile,” which became a chart-topping single in UK and Europe a year after the album’s release in the US, is equally long-lived.

Following the release of Semisonic’s third album, “All About Chemistry,” a change was in the air. Wilson had been recording and touring constantly for nearly fifteen years. But a few years earlier, in 1997, Wilson had become the father of a little girl whose complex disabilities called for more of his presence at home. In 2003, Semisonic’s long-time record label, MCA, dissolved in a series of mergers and acquisitions, and Wilson found himself facing the question of what to do next.

Around this same time, Wilson was reinventing himself as a songwriter. The new songs from those days were quiet, folk-inflected, sometimes heartbreakingly delicate. The recordings were live, roomy, convivial. Soon, a batch of the new solo recordings known as “The Ballroom Sessions” was being passed hand to hand in Los Angeles and elsewhere. These introspective, predominantly acoustic tracks were the result of a series of sessions in Wilson’s house, recorded live on mostly borrowed equipment by the singer and a large band of friends. The organic instrumentation and deeply private-sounding songs seemed far removed from Semisonic’s bright and burnished pop-rock.

One person who found himself listening to a copy of “The Ballroom Sessions” was legendary producer and record-company mogul Rick Rubin, who got his copy from Sheryl Crow. Rubin contacted Wilson the day after receiving the songs, and soon Wilson was signed to Rubin’s American Recordings label. The two agreed that Wilson would continue the work begun in Minneapolis with occasional collaborative visits to Rubin’s Los Angeles recording studio.

As his solo career took flight, Wilson’s songwriting did as well. He began writing songs with artists for their own albums as well as his own. Today Wilson is known in music circles as a songwriting collaborator with few peers. His co-songwriting practice achieved a memorable high-water mark on the Dixie Chicks’ album “Taking the Long Way”. He and the country/bluegrass trio co-wrote six of the songs on that album, and won the 2007 Song of the Year Grammy for their anthem “Not Ready to Make Nice.” The Dixie Chicks went on to win five Grammies for the record.

As a recording artist, songwriter and producer, Wilson has worked with some of the most celebrated figures in rock and pop music, artists of widely diverse styles and sounds: The Dixie Chicks, Sheryl Crow, Mike Doughty (whose albums “Haughty Melodic” and “Golden Delicious” Wilson also produced), Jason Mraz, Rick Rubin, Carole King, Keith Urban, Josh Groban, KT Tunstall, Rivers Cuomo, Rachael Yamagata, Jewel, Adele, James Morrison, and Katy Perry, among many others. He is currently working on his second solo album in Minneapolis.

Wilson studied fine art at Harvard College, where he concentrated in Visual and Environmental Studies, focusing on printmaking and history of design. After college he spent a few years in San Francisco being a bohemian, drinking espresso and learning how to paint in oils. Through the 90?s he had gallery representation in Minneapolis and many of his paintings are held in collections around the country. In the mid-90?s, he set aside his oil paints in favor of the much more portable rapidograph technical pen, and his visual art now consists of the occasional effort to emulate R. Crumb’s cross-hatching style.

Wilson lives in Los Angeles with his wife and two daughters in an old house in the hills.

Wilson recently released “Live at the Pantages”, a double live album. The first disk is a solo acoustic set with a selection of songs written across his continually evolving career. The second is a full-band set featuring the core group from the Ballroom Sessions and “Free Life.” Last year, Dan Wilson and his brother Matt Wilson released a download-only live record called “Minneapolis 2010?, an audio document of their duo performance in March of this year, the first time the brothers had done a set together since 2003 and only the second time since the dispersal of Trip Shakespeare. Both records are available at danwilsonmusic.com.