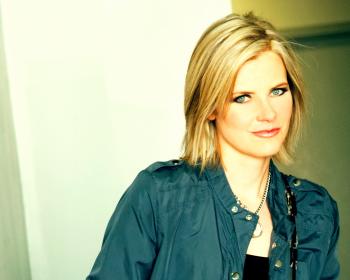 Artist,
Melanie Doane
Toronto, ON, Canada
“There’s no place like home” sings Juno Award winning singer-songwriter Melanie Doane on “Ruby Slippers”, the opening track from her new album THE EMERALD CITY, out March 1 on iTunes internationally. While a Wizard of Oz theme is apparent, Melanie isn’t channeling her inner Dorothy on this fresh set of pop-rock gems. “The Emerald City is an image we all know,” says Doane. “It means different things to different people, but ultimately it's the only image I know of that embodies disenchantment and hope at the same time. It's the shattering of something you believe in, but somehow optimism remains. That’s where I’m coming from with these songs.”

THE EMERALD CITY follows 2008’s critically-acclaimed A THOUSAND NIGHTS, an album inspired by Melanie’s experiences with motherhood and featuring an assortment of original tunes and classic covers re-arranged as lullabies. That album generated prominent song placements in hit shows like CBC’s Being Erica and CBS’s Flashpoint, and celebrated Melanie’s softer side musically and lyrically. In contrast, THE EMERALD CITY feels like a return to form, recalling the edgier style of her breakthrough Gold-selling record ADAM’S RIB while tactfully showcasing Melanie’s multifaceted skills as a vocalist, songwriter, and multi-instrumentalist (she plays guitar, violin, piano, ukulele, mandolin, and bass). “I had more to say this time around, so it's nice to have a place to say it,” affirms Doane.

The “more” she’s referring to are the changes she’s faced over the past few years. Having embarked on a new side project as a music educator while continuing to tour and write songs, the recently separated mom is busier than ever and putting it all into her creative work. “My life has been changing considerably, and like all moms, it's a bit of a balancing act. Nevertheless, music still remains at the centre of everything I do and [I feel] this album showcases that. I'm grateful to continue to have my music as an outlet.”

Artfully produced by her drummer and brother Creighton Doane, THE EMERALD CITY is an emotional journey, chronicling love lost and an understanding of self gained. A witty songwriter who skillfully employs a “less is more” approach to her craft, Doane finds new and interesting ways to incorporate familiar images and phrases into her most personal work to date. The verses of “The Stupider I Am” recount the simple things we learn growing up (“Eat when you’re hungry/When you’re tired, close your eyes”), while its chorus cleverly asserts ownership of one’s missteps (“The more I know, the stupider I am”). “Disaster Waiting to Happen” finds Melanie comparing personal crisis with that of famous tragedies (“I’m the Titanic, just before the ice/I’m Romeo and Juliet/I’m a disaster waiting to happen/But I can’t see it yet”), while the album closer “Make God Laugh” is about relinquishing attempts to control fate and accepting the present as reality. (“My only sorrow/My only true regret/Living for tomorrow/One day I’ll never get”)

The product of a musical family, Halifax-born Doane has spent a large portion of the last fifteen years on the road supporting her numerous solo albums. While her debut album SHAKESPEAREAN FISH received critical praise and garnered a loyal following, the release of ADAM’S RIB in 1998 brought Melanie's music to a mainstream audience. With a running theme that is best described as a “delving dichotomy”, ADAM’S RIB brilliantly showcases Melanie’s flair as both an instrumentalist and songwriter, featuring punchy-relevant lyrics laced with strong musical wit. What followed the albums release is nothing short of extraordinary: multiple top 40 singles, a Juno Award for Best New Artist, a Canadian Radio Award for Most Charted Rock Artist, over 200 shows in Canada and the U.S. with the likes of Jann Arden, Sarah McLachlan's "Lilith Fair", and Great Big Sea, and a Gold record award.

Since ADAM’S RIB, Melanie has pursued her career independent of the label system. In 2001, she recorded and released the fan cherished MELVIN LIVE, an album showcasing her energetic and diverse live show. Her third studio album YOU ARE WHAT YOU LOVE followed in 2003, preceded by the lead single “Still Desire You”, which spanned multiple formats and eventually went Top 5. A THOUSAND NIGHTS followed in 2008, preceded by the albums lead single "Songbird" with Jim Cuddy which reached Top 5 on the iTunes Country singles chart. To date, Doane has written seven chart topping singles across various formats in Canada.

Between raising kids and making records, Melanie has managed to tour in support of each album, write songs for various artists, play as a side man on several albums, have her music featured on hit television shows like Brothers and Sisters, Being Erica, Flashpoint, and Buffy the Vampire Slayer, and travel across Canada and the U.S. (in 2007, 2008, and 2010) on the CPR Holiday train - playing 60 shows in less than a month while raising money for local food banks. She was also recently commissioned by Bobsleigh Canada Skeleton to write and record a song celebrating 20 years of Women’s Bobsleigh in Canada and was invited to perform the song (“Here on Top of the World”) at the F.I.B.T World Cup in November.

With the release of THE EMERALD CITY, Melanie will continue doing what she loves – making great music. “I'm in a better place creatively than I have been for a long time. I'm excited to be promoting this new album and I'm looking forward to writing and planning for the next one.”