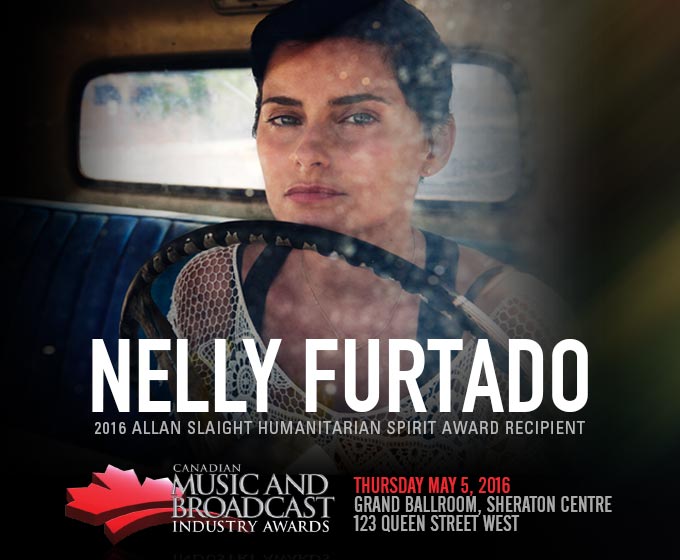 Canadian Music Week is pleased to announce Nelly Furtado as the 2016 recipient of theAllan Slaight Humanitarian Spirit Award. The award, bestowed to outstanding Canadian artists, is in recognition of their contributions to social activism and support of humanitarian causes.

Celebrating Furtado’s extensive work with Free The Children and participation in We Day, the award will be presented at the Canadian Music & Broadcast Industry Awards gala to be held on Thursday May 5 at The Grand Ballroom of the Sheraton Centre in Toronto during Canadian Music Week 2016. “I am greatly honored to be recognized by the Slaight Family with this award and thrilled to join the ranks of a list of musical peers whom I greatly admire,” states Furtado.

Furtado travelled to Kenya with Free The Children in 2011. There, she met the 40 students at the first all-girls secondary school, Kisaruni, and other young women who hoped for a spot in the future. When she returned home, the new Free The Children Ambassador participated in her first We Day in Waterloo, Ont. and has been a regular ever since. During her last album, 2012’s The Spirit Indestructible, the singer raised money for a second girls high school in the community called Oleleshwa, and matched every dollar. Furtado has been back to Kenya with Free The Children three more times, including this past Christmas for the first graduation ceremony.  She’ll travel there again at the end of this year — and for a long time to come. For more about Nelly Furtado and her experiences with Free The Children, read her exclusive in-depth interview with Karen Bliss at Samaritanmag.com here.

“Not only has Nelly’s music brought joy to people all over the world, but through her many trips with Free The Children and generous financial donations, she has had a lasting impact on young women in rural Kenya who would otherwise not have an opportunity to go to high school. She has also boosted enthusiasm for Free The Children by telling her inspirational stories at many We Day events for students across the country. My father and I are honoured to make Nelly the latest recipient of the Allan Slaight Humanitarian Award. She is truly deserving,” says Gary Slaight, President and CEO, Slaight Communications.

Furtado, the Canadian-born singer, songwriter, actress, and philanthropist, who is of Portuguese descent, has enjoyed a vibrant and successful career as a multi-language superstar. By embracing different cultures and genres, she has helped define musical diversity for a new generation ever since unleashing her debut, 2000’s double-platinum Whoa, Nelly!, which spawned “I’m Like A Bird,” followed by 2003’s gold Folklore, whose “Forca” became the official anthem of the 2004 European Cup Football Championship.

In 2009, she released her first Spanish-language album, the Latin Grammy Award-winning Mi Plan, which reached No. 1 on the U.S. Latin Billboard chart and swept Canada’s Juno awards with five wins including Album of the Year. In total, Furtado has sold more than 16 million albums and 18 million singles worldwide. She has racked up many international honors, including a Grammy Award, a BRIT Award, a Latin Grammy Award, World Music Award and 10 Juno awards.

ABOUT CANADIAN MUSIC WEEK
Now in it’s 34th year, Canadian Music Week is recognized as one of the premiere entertainment events in North America focusing on the business of music. The Canadian Music Week festival spans 7 nights of performances, with hundreds of showcasing bands at more than 40 live music venues in downtown Toronto. All convention functions take place at the Sheraton Centre Toronto Hotel, 123 Queen Street West, Toronto.

ABOUT ALLAN SLAIGHT
A pioneer of rock and roll, Allan parlayed his entrepreneurial flair with his knowledge of radio to create Canada’s largest privately owned multi-media company, Standard Broadcasting Corporation Limited. An inductee into the Broadcast Hall of Fame (1997), the recipient of an Honorary Doctor of Commerce from Ryerson Polytechnic University (2000), appointed a Member of the Order of Canada (2001), the recipient of the Walt Grealis Special Achievement Award (2005) for his contribution to the growth and development of the Canadian music industry, Allan has also maintained a life long interest in conjuring.

ABOUT FREE THE CHILDREN
Free The Children is an international charity that partners with communities to help lift them out of poverty using a holistic, sustainable five-pillar development model. The organization is unique among Canadian charities in that it operates collaborative programs both domestically and internationally.

ABOUT WE DAY
We Day is a celebration of youth making a difference in their local and global communities. We Schools is the yearlong program that nurtures compassion in young people and gives them the tools to create transformational social change. Together they offer young people the tools and the inspiration to take social action, empower others and transform lives—including their own.