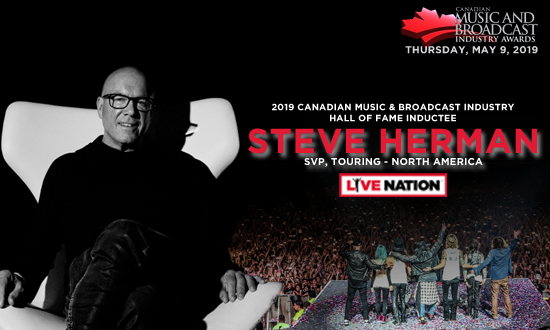 TORONTO, ON – (October 1, 2018) – Canadian Music Week is pleased to announce Steve Herman (SVP, Touring – Live Nation) as the 2019 inductee to the Canadian Music & Broadcast Industry Hall of Fame. Steve will be honoured for his achievements and longstanding career in the music industry at the annual Canadian Music and Broadcast Industry Awards Gala Dinner at Rebel Entertainment Complex in Toronto on Thursday May 9th, 2019.
Steve has been involved in the music industry for decades and throughout his many roles, he has impacted, developed, and guided the careers of many artists and industry leaders.
Steve joined Live Nation in 2009 as President of Artist Service and soon after joined the company’s Touring team as Senior Vice President, where he is now one of company’s leading tour promoters. Steve has promoted some of the world’s top artists, including: Prince, Dixie Chicks, Backstreet Boys, Black Sabbath, Tom Petty and The Heartbreakers, Bryan Adams, Yusuf (formerly known as Cat Stevens), David Blaine, Nickelback, OneRepublic, and The Smashing Pumpkins to name a few.

Most recently, Steve worked with the team that successfully reunited Guns N’ Roses where he promoted the “Not in This Life Time Tour.” This tour has recently surpassed $600 million in gross box office sales – making it one of the highest grossing tours in history.

From 2002-2009, Steve served as the North America CEO for The Agency Group (TAG), a leading global artist agency. At TAG, Steve guided a talented team of over 60 agents, which exclusively represented close to 1,000 international artists. In addition to TAG, Steve also consulted and produced major outdoor events for the Canadian Government, both domestically and abroad. Some of these events include, promoting Canada’s July 1st Outdoor Festivities in the nation’s capital, as well as staging a concert series in Nagoya, Japan as part of Expo 2005.

Prior to this, from 1995 to March 1998, Steve served as the SVP of Universal Concerts where he played an instrumental role in building and opening Canada’s first stand-alone outdoor concert venue, now called Budweiser Stage. In his tenure at Universal, Steve promoted the Canadian tours of many artists including: Rush, Van Halen, Alanis Morrisette, Bruce Springsteen and others. During this time, he pioneered the “Edgefest,” which became one of Canada’s largest annual music festivals.

In 1986, after graduating from Carleton University, Steve began his professional career as an agent in Vancouver at S.L. Feldman and Associates, where he represented a handful of artists. Between 1986 and 1995, Steve guided and recruited a team of agents that represented over 150 artists, transforming a small west coast booking agency into Canada’s largest talent booking agency. As a personal agent, Steve’s vision and leadership contributed to the growth and career development of many artists including Bryan Adams, Sarah McLachlan, Grapes of Wrath, Sons of Freedom, Crash Test Dummies, 54- 40, The Tragically Hip, Colin James and numerous others

Steve has always been active in Canada’s music development, having contributed his time to a number of non-profit organizations, including CARAS, where he served as Chairman, TV/Talent Committee.  In addition, Steve was on the board for the Juno Awards where he played a key role in revitalizing the Juno Awards, turning it into a touring property where it gained a wider audience.

During his career, Steve has been recognized at the Canadian Music Industry Awards by his peers twice: in 1994 as “Agent of the Year” and in 1998 as “Promoter of the Year.” No other individual has ever received both honors.