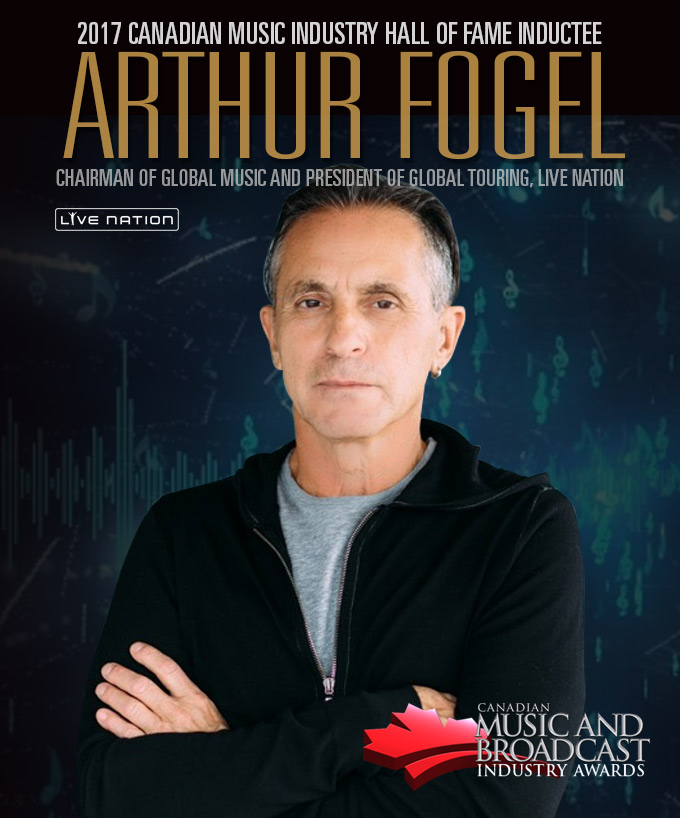 Arthur Fogel is known as The Man behind the biggest rockstars – producing the most successful tours in history. As part of Live Nation, the largest concert promotion company in the world, He reunited The Police, saved Lady Gaga from bankruptcy and has managed four of the top five highest-grossing tours in history.
In a film celebration of his career, Who the F**K is Arthur Fogel – a backstage view into his career,  U2 frontman Bono calls him, “Clearly the most important person in the live music world. We’re not stupid. There’s only one of him.” Arthur would tell you he specializes in promoting and producing global tours. The artists he handles dominate the live circuit. Mentored by Canadians such as Donald Tarlton, Norman Perry and Michael Cohl, Arthur has never forgotten where he got his start. CMW is proud to welcome Arthur Fogel into the Hall of Fame”, says CMW President Neill Dixon..

“I am honored to be inducted into the music industry hall of fame. It is particularly gratifying given my history and roots in Canada and the Canadian music industry.”

Over a storied, 35-year career, Fogel has earned his reputation as a fierce ally to some of the biggest names in music, working behind the scenes to build worldwide tours that are among the most memorable and highest-grossing in history.

Fogel oversees the acquisition of global artist tours and personally oversees many of Live Nation’s largest tours, among them:

* U2 360° Tour, the most successful tour in history with 7 million tickets sold and gross sales of $735 million. He also produced the band’s PopMart, Elevation, Vertigo and the current iNNOCENCE + eXPERIENCE tours

* Each of the last five world tours for Madonna, including the 2008/2009 Sticky & Sweet Tour, which became the highest grossing tour in history by a solo artist, grossing over $400 million

* Lady Gaga’s The Monster Ball tour, the highest grossing tour for a debut artist in history. He also produced the 2012 Born This Way Ball tour, the 2014 ArtRave: The ARTPOP Ball tour, as well as her 2015 tour collaboration with Tony Bennett

* Police Reunion Tour, one of the top 10 grossing tours in history with 3.3 million tickets sold, as well as being Sting’s tour promoter for over 15 years, including the current co-headline tour with Peter Gabriel

His achievements have been recognized by inclusion on the Billboard Power 100 list each of the last four years; the TJ Martell Entertainment Visionary Award (2014); and Pollstar Promoter of the Year (2007).

Fogel began his promoting career in 1981 with Toronto-based Concert Productions International (CPI), which promoted artists and tours across his native Canada. In 1986, he was appointed President of the Concert Division at CPI, a position he held until 1995. He subsequently became President of The Next Adventure (TNA), a global touring company formed by the principals of CPI. In 1998 following the acquisition of the company by SFX, he oversaw the global touring division. In 2002, SFX was acquired by Clear Channel Communications where Fogel ran the Global Touring division. In 2005, the live entertainment division was spun off as Live Nation.