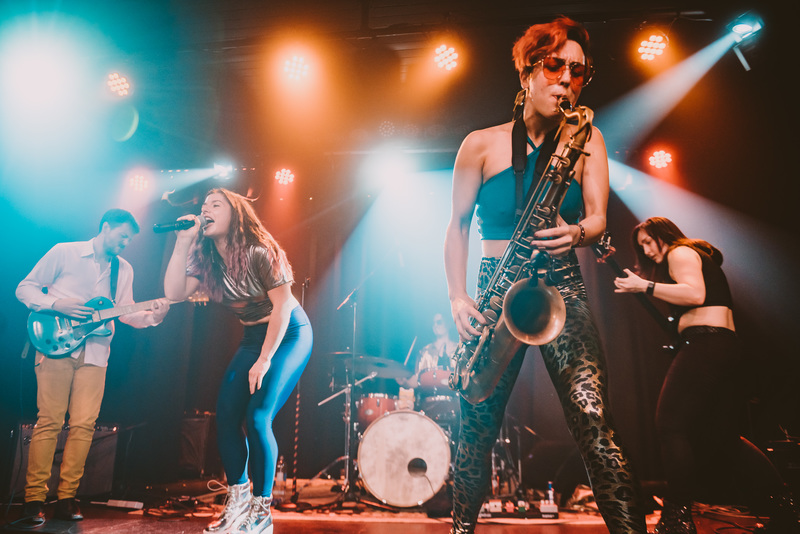 Raincity is a Vancouver-based Funk-Rock group making waves with their unique sound. Fronted by female leads on saxophone and vocals, their audacious performances are loaded with engaging interplay and explosive energy. The five members of Raincity combine their eclectic influences including Amy Winehouse, Moon Hooch, and the Red Hot Chilli Peppers, creating a distinctive sound with infectious grooves, chameleon tones, and no regard for boundaries. Each musician is equipped with as much personality as style, leading to a dynamic live experience that is unapologetic and empowering.

Raincity first came together as a jazz trio in 2016, known then as ‘Raincity Blue’ before growing to a 5-piece. With the support of Creative BC, they recorded their debut album “Stuck on Replay” at Rain City Recorders in August 2017. They released the album at the Wise Hall in January 2018 to a sold-out audience. Early in 2018 the band progressed to the Top 100 of CBC Searchlight and they won contests including the Hard Rock Casino’s Rock the Mic competition, Music Heals Covers for the Cause contest, and The Roxy Launch Project.

Throughout 2018, Raincity performed at a number of festivals including Victoria’s Rifflandia, the TD Vancouver International Jazz Festival, and with the help of FACTOR, presented at Canadian Music Week in Toronto. They appeared in articles on the Vancouver 24 Hr, Do250, The Nanaimo News Bulletin, Snipe News, and featured as guests on radio stations such as Pacific Sound Radio, Roundhouse Radio, and CiTR Radio.

Raincity recorded their self-titled EP at Warehouse Studios in November 2018 (released June 2019). Most recently they opened for Our Lady Peace and Bif Naked at the Surrey Canada Day main stage and toured Vancouver Island, Interior BC, and Washington. Upcoming releases include two music videos directed by Wayne Chung and Bailey Wood and a new single “Insomnia” recorded at Blue Light Studios.