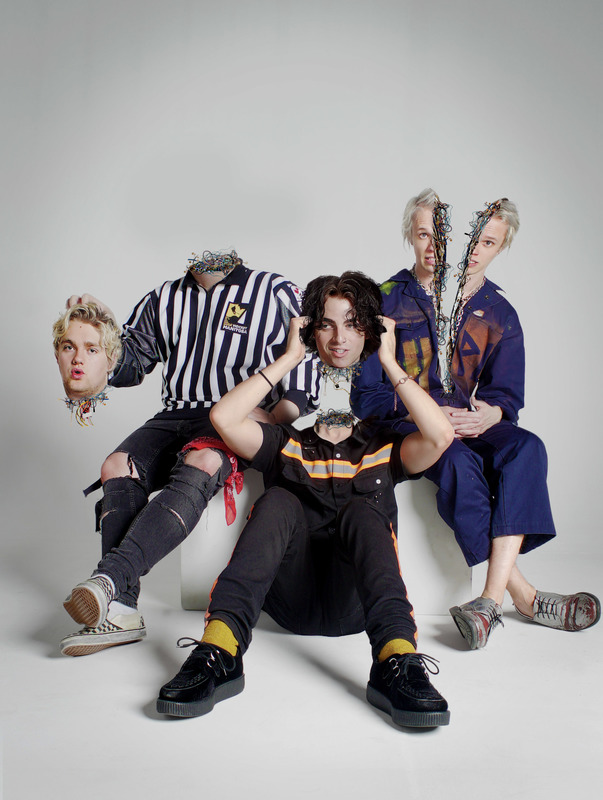 Alternative-Pop
“We always ask ourselves questions like ‘if Queen, Bruno Mars, and Green Day were stuck in an elevator together with nothing but a laptop and a mic, what would that sound like?’ and then we write it”. Comprised of two brothers and a childhood friend, the nostalgia-obsessed alternative-pop trio, Panicland, is on a quest to fulfill these musical fantasies; squeezing the post-genre era of music for all it’s worth.

Following the radio success of their previous independently released single, BAD WORD — which reached #26 on the Billboard Top 40 Canadian Singles Chart and was three times the #1 Most Added Single at Top 40 Radio — the band grew tired of the hook-driven, dancey sheen of the 2010s, still lacquered onto many of today’s more alternative pop offerings. The band began to focus not on what they were hearing on the charts, but what they weren’t hearing.

Now in 2019 they have acquired their first production deal with Los Angeles producer, BSAMZ (Lady Gaga, Bad Wolves), as well as receiving a nod from Billie Joe Armstrong (Green Day), who featured the band on his Instagram. They also gained the support of Pete Wentz (Fall Out Boy) and Spencer Smith (Panic! at the Disco), after a recent string of shows and recording sessions in LA.

Where is “Panicland”? “People are looking for a place to escape to right now and I want Panicland to feel like an actual little world people can hide in. Like an amusement park and every song is a different ride”
– Singer, Braedon Horbacio

Panicland formed as teens in Winnipeg, Canada. At age 12, singer Braedon Horbacio landed a job as a Little Caesars “sign shaker” to fund his childhood dream of having his own recording studio. By 13, in his new home studio, Horbacio began writing and recording “fantasy” EPs; creating make-believe bands in different styles and writing songs he thought they’d write. Each had an imagined band name, genre and line up of members but with real songs and recordings.

“I’m an obsessive person. I was the kid who failed all his classes because I’d be writing songs in the back of the classroom. So eventually I had all these songs recorded but no band.”

With an already existing catalog of music, it was decided that the best set of songs belonged to imagined punk band, “Panicland”. The name stuck and the trio was born.

After teaming up with BSAMZ, the new creative partnership wondered “What would it sound like if the people who produced Astroworld or the Post Malone album produced a Queen song?”. The band set out to fulfill this fantasy, combining their eclectic style of songwriting, laced with the nostalgic hooks, harmonies and storytelling of the ’60s and ’70s, with the hip-hop production elements of 2019. The result was their latest single, FINGERTIP MEMORIES, and a dozen ‘pocket-sized’ epics, each clocking at around 2 minutes and 30 seconds and offering a new era of influences tailored for a modern ear.