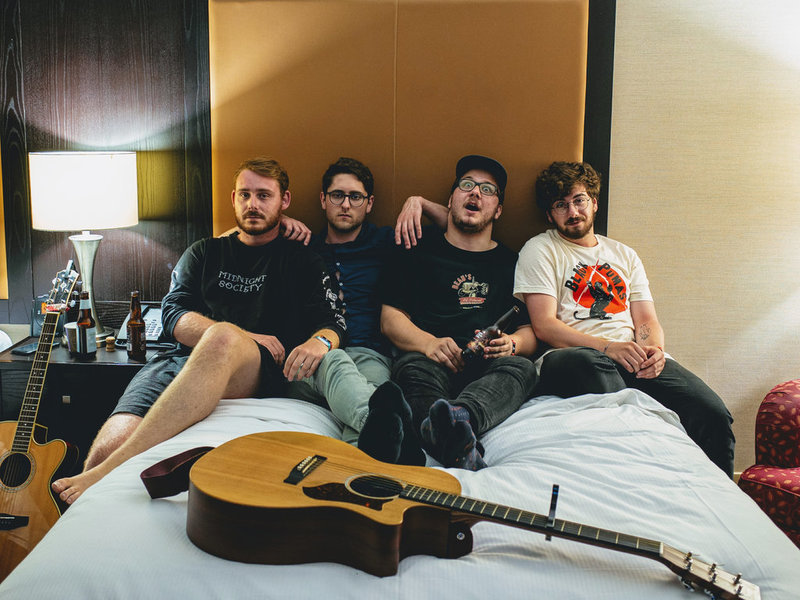 Indie Folk
Thomas Aguinaga (Drums/Percussions, Harmonica), Sam Gendron (Keyboard), Phil Goodman (Guitar, Vocals, Percussions) and Marc-Antoine Moisan (Guitar, Vocals) are an Indie Folk band from Aylmer, Quebec, across the river from the no-nonsense,straight-laced, won’t-crack-a-smile-at-a-dirty-joke, capital of Canada. Okies bring together their eclectic individual tastes to form a unique and captivating sound that dips its toes, testing the waters, of many different genres. Said to sound much like Alt-J, Fleet Foxes, Andy Shauf and Passenger, they prefer to step away from the labels and simply state that they play “honest music.” They began as a two-piece in late 2013 with Thomas Aguinaga on drums and Marc-Antoine Moisan on guitar and vocals, playing riveting Folk tunes with an emphasis on hard-hitting drums and arduous guitar picking, yet quiet and soulful vocal melodies. However, they quickly realized their songs were missing something crucial. High school friend Sam Gendron joined on keyboard early on, bringing the songs to life with his unrivaled sense of melodic synth and bass tones. Later, as their sound continued to expand, they added good friend and multi-instrumentalist Phil Goodman to play an assortment of supportive instruments, as well as being a complementary voice to Moisan’s already captivatingly unique vocals. Now, with five years of experience under their belts as an ensemble, the four young Gatinois have played all over the National Capital Region, in such places as Zaphod’s, Ritual Nightclub, Maverick’s, Le Petit Chicago, Le Minotaure, Black Sheep Inn, and many more. They’ve also been lucky enough to be a part of numerous festivals like the Aylmer Folk Festival, Le Festival de L’Outaouais Émergent for the 2015 & 2016 editions, Festival Diapason 2017 in Laval, RBC Bluesfest 2018 in Ottawa, and as of late the 2019 edition of the Festival D’ete de Quebec in Quebec City. They’ve put out two EPs so far and one album entitled “Aylmer” in honour of their hometown. They’ve just released their newest EP, “Once a Fisherman from Spain”, in May 2019.
Bandcamp
Apple Music
Soundcloud
Spotify
Twitter
Instagram
Facebook
Website