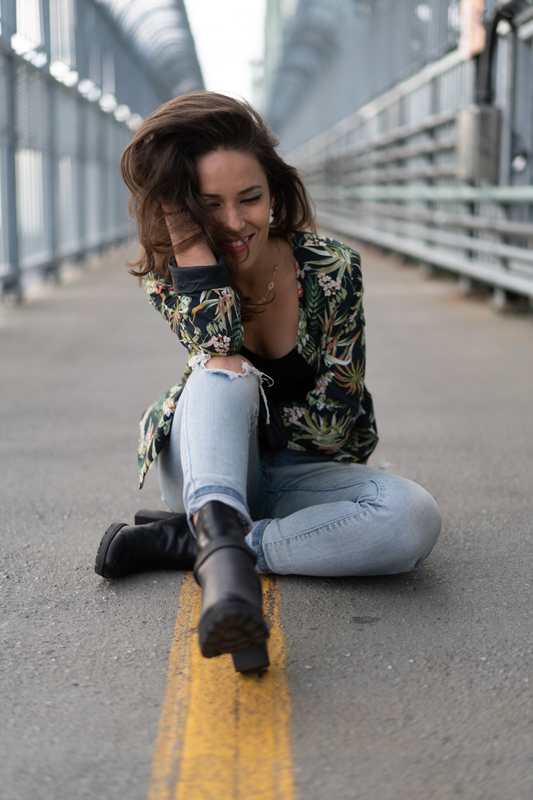 Female
French-Moroccan vocalist Nora Toutain has honed her craft and grown on the RnB and Soul scene in Montreal over the last four years. Wherever she performs, her ease and energy on stage charms crowds. Her eclectic style is influenced by her personal experiences, as well as her diverse cultural upbringing. She is currently working on her first solo album … make sure you stay tuned!

Born and raised in Morocco, her early influences came from the records that were played at home, having parents who loved music ranging from classical to jazz/rock/blues, as well as traditional north African rhythms.

Nora got her start in music through the Kalmunity Vibe Collective in Montreal, who held workshops and helped her develop her voice and discover the art of improvisation in music. It was here that the filmmaker Feven Ghebremariam chose Nora as the subject for a documentary called “De l’autre côté de sa voie” which premiered at the World Film Festival of Montreal in 2013. Since then, the young songstress quickly found her place in the underground Soul and RnB scene in Montreal. She now performs on a regular basis she performs in local venues such as Petit Campus, Cafe Resonance, Dièse Onze, Quaie des Brumes and the Bootlegger. In addition to her personal projects, she is involved in collectives regrouping the best of Montreal’s talent. She is a guest host for the renown weekly Hip Hop/Soul Jam “LeCypher”, and participates in the Montreal Jazz Festival with Kalmunity and for her project as well.

Nora set herself as a unique performer evolving at an impressive speed, as she was only introduced to the music industry and performing arts through Kalmunity. She is now an established, sought out musician and vibrant voice in the scene. Nora is a true testament of artistic actualization through a disciplined work ethic. Her craft is matched with a refined sound celebrating the colours and influences of an array of cultures and trades.

As part of a small media tour during her travels, Nora made sure to mark her art within a broader international presence. She has appeared on “MEDI1 TV” a prominent National Moroccan broadcast television. There she also took the occasion to perform and has graced the stage in her Moroccan hometown. She also together a full performance in Paris at “l’Etage”, a local RnB/Soul venue. Through her eclectic sound Nora has found carved the space to share among many cultures and scenes, her unique musicality and artistry.

She will be releasing her first single “Bad at Love” on octobre 25th 2019. The single will then be followed a couple more releases, leading up the the release of her first solo album, planned for April 2020. The album is co-produced by Christopher Vincent of Busty and the Bass.