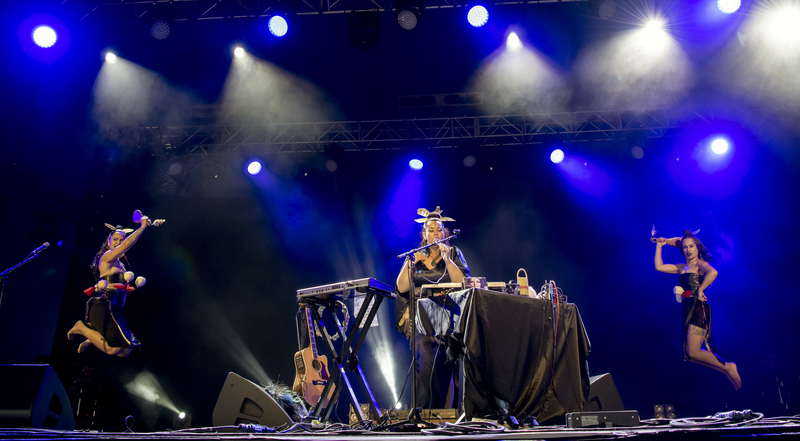 “One of the most talked-about bands at the event (Bluesfest Australia). Visually stunning and beautiful sounding” Australian Music Mag April 2019

A powerful and fierce all-female Māori world-roots production lead by internationally renowned “Queen of Loops”, Māmā Mihirangi. Weaving ancient chants with intricate harmonies, traditional & contemporary instruments, beats & deep bass, all being innately familiar but all of it incredibly unique. The Māreikura are her female dancers who embody the virtues of feminine power and inspiring cultural identity with the Women’s haka, traditional weaponry and Māori martial arts combined into a contemporary & cultural performance that is informative, inclusive and truly inspiring.

“She’s just brilliant with a capital ‘B’! In the 30 years I’ve toured the world I’ve never seen anything like her… she belongs on stage.” Ali Campbell, UB40

Mihirangi’s lyrics poetically celebrate her lineage and culture, uplifting her audience with her infectious laughter and fearless authenticity. Her show invokes and expresses the strength and spirit of the feminine in the full spectrum of it’s power from raw vulnerability to Indigenous disciplines that powerfully lend themselves to the global equality of feminine expression, empowerment and freedom. A musical journey of the soul that travels back through the ancient lines of her Ancestors.

“Mihirangi has got locked down a whole new way of doing music… it’s going to revolutionise us as artists” Speech, Arrested Development

On the Executive Committee of the Global Alliance of Mother Nature’s Guardians, for the last two years Mihirangi and the AMNG has been addressing the World Governments, the UN and the International community as Ambassador’s for the Declaration of the Rights of Mother Earth, encouraging indigenous values into legislation.

After a highly successful first tour in Canada in 2018, Māmā Mihirangi & the Māreikura performed at this years Byron Bay Bluesfest for their 30th Anniversary to critical acclaim…

The ABC Australia by Dan Condon 21 April 2019
“Not only had I never seen Mama Mihirangi and the Mareikura, I’d never really seen anything quite like them… Mama Mihirangi has a voice of both immense power and beauty. Those big notes were complete showstoppers”.

The Music Australia by Lauren Baxter , Nicolas Huntington 22 April 2019 |
“It’s a powerful set so early in the day, Māmā Mihi’s voice especially so. Between filming a video of the audience saying hello to her daughter and the unfurling of a ‘Stop Adani’ banner, we leave feeling re-energised by the looping magic”.