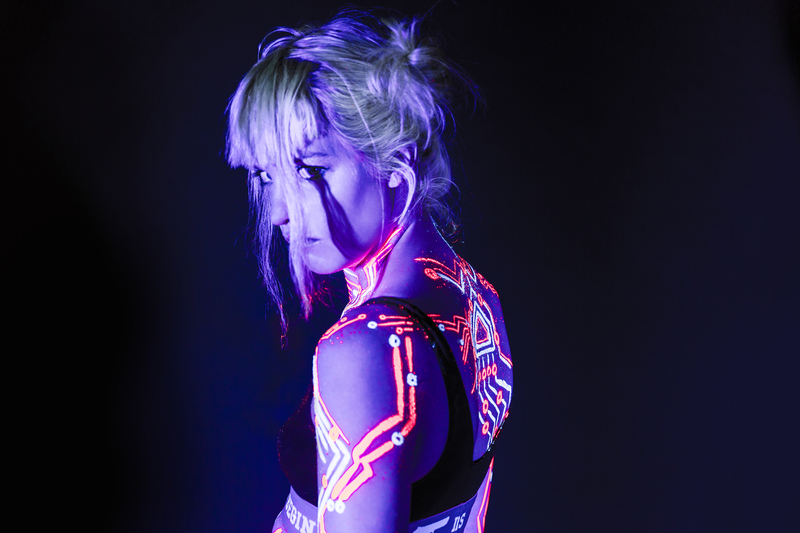 Electro pop
The danish girl with the bruised knees jumping down from stage swinging the chord of the microphone like a whip while she sings as much of sex and drugs as emotions and far away places.

At times it can seem like the Danish singer Lydmor is everywhere at once. One moment she is standing on the top of a bar in a venue in Sao Paolo singing her heart out while the beat is pumping over her sweaty dancing audience. Next she playfully coproduces a track with j-pop legend Takeshi Kobayashi, or composes a soundtrack for an animated fantasy series. In between her myriad of creative collaborations (including critically acclaimed “Lydmor & Bon Homme”)the young producer and singer has managed to tour most of the world several times, playing from the biggest festivals and venues to at times in the homes, in tiny living rooms, of her biggest fans.

The eccentric Scandinavian girl balances always on the tip of a knifes edge between light and dark. Between loving and cold. Order and chaos. If you manage to catch one of her shows, she will flirt, dance, cry, scream and hug her way into your heart with a brutal honesty that comes across both in her pumping rhythmical electro sounds as well as her emotional dreamy side.

Multiple media has compared the quirky voice to the likes of Grimes, Kate Bush or Björk but inevitably the comparisons fall short. Lydmor is quite her own and since she returned from a mysterious stay in Shanghai in China (that lead to the album I Told You I’d Tell Them Our Story”) she has been touring all over Europe, UK, and Asia.