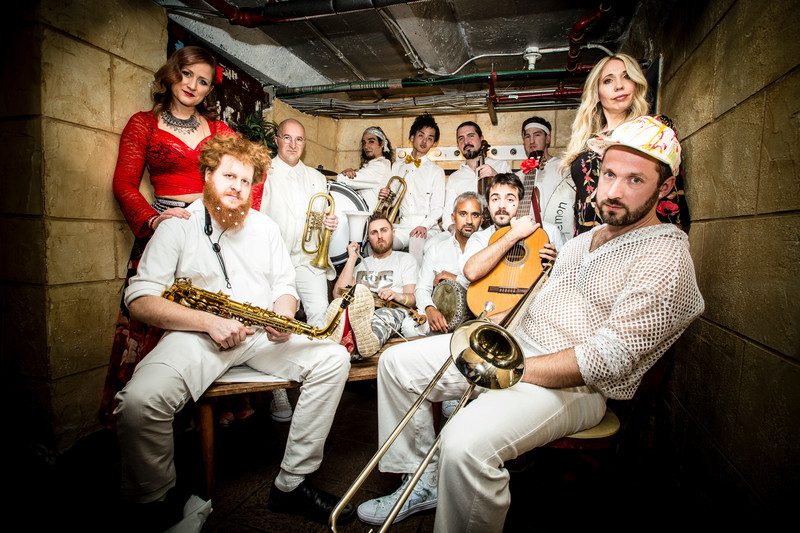 Balkan party punk brass band
Lemon Bucket Orkestra is a guerilla-punk-Balkan-brass band massive like no other. They trace their genesis back to the streets of Toronto’s Kensington Market, where an original quartet of busking troubadours amassed a battalion of like-minded musical travellers and the mighty 12 piece Orkestra was born! Equal parts reckless abandon and exhilarating precision, the dozen strong collective’s legendary live shows are a truly immersive experience, ranging from the ecstatic to the cathartic – and all points in between. They’ve performed on streets and stages from Budapest to Brooklyn to Berlin, leaving a trail of new fans in their wake. Their latest album “If I had The Strength” was released worldwide on the renowned Six Degrees record label. Featuring innovative collaborations with the likes of Measha Brueggergosman, Toronto’s post flash mob phenoms, Choir!Choir!Choir! and Latino MC Boogat. As the Edmonton Journal’s Roger Levesque put it, “the album vibrates with an irrepressible passion and playful humour that’s impossible to ignore.” And indeed when LBO is in the house, ignoring them is never an option. With theatrics, incredible musicality, and notorious audience inclusive ways, they turn every show into an experience you won’t soon forget.

In the last two years the band has toured far and wide, including first time performances at WOMAD UK, the New Orleans Jazz & Heritage Festival, the Auckland Arts Festival and the Kilkenny Arts Festival. They’ve also begun work on a new album due out next year. The band has also toured through Poland (Pannonica Festival, Światowid, Wroclaw) and continue to work with our agent there, Alex Doroshenko at Wschodni Music Agency. Manager Ian Menzies and band leader Mark Marczyk plan to attend the conference as full delegates and are looking forward to strengthening connections with the Polish scene and the delegates who come over for the event.