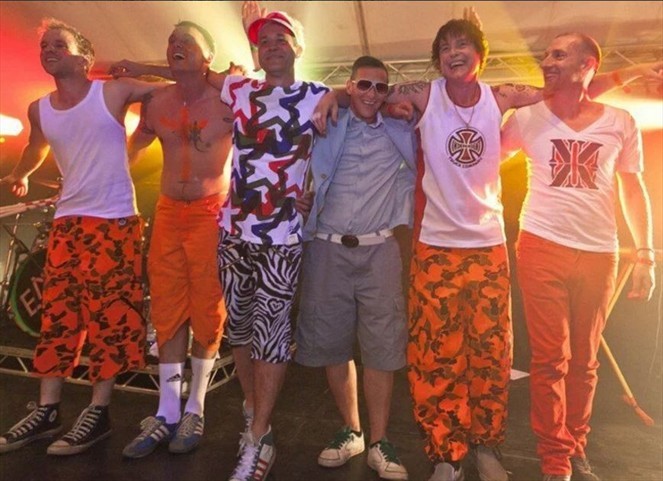 British dance-rock quintet EMF formed in Cinderford, England in October 1989.
All five original members — vocalist James Atkin, guitarist Ian Dench,
keyboardist Derry Brownson, bassist Zac Foley and drummer Mark DeCloedt —
were veterans of the local music scene before founding EMF, whose name
supposedly stood for “Epsom Mad Funkers” (although it was widely speculated
that the initials instead represented “Ecstasy Mother Fuckers”). Within two
months of formation, the group played its first gig; after unearthing a Casio
sampler and sequencer in a local thrift shop, a light techno element was added
to their rock-oriented sound.
Their debut album, SCHUBERT DIP, was released in May 1991. It was certified
platinum (over a million copies sold) in the US in September 1991. It had
reached a peak chart position of #3 in the UK and #12 in the US, as well as
finishing the year at #57 overall.
By the end of 1991, their infectious debut single “Unbelievable” had conquered
the charts on both sides of the Atlantic, hitting #1 on the Billboard Hot 100 and
#3 in the UK. The single was certified gold (over 500,000 copies sold) in the US
in May 1991. The song was in such heavy rotation for most of the year in
America, that it finished as the #6 single overall for the year.
Further hit singles that succeeded “Unbelievable” included “I Believe,” “Children”
and “Lies.”
In 1992, EMF returned with the Unexplained EP and the much darker full-length
effort STIGMA; STIGMA peaked at #19 on the UK charts, and the band toured
extensively to promote it. It produced hit singles and EMF live set favorites,
“They’re Here” and “It’s You.”
The band released their final full-length album of new material in 1995 with
CHA CHA CHA. After a successful European tour, they teamed up with comics
Vic Reeves and Bob Mortimer on a cover of the Monkees’ “I’m a Believer,” which
reached number 2 on the UK charts.
The band reunited in the summer of 2001 and released a Greatest Hits CD that
coincided with a mini European festival and UK tour. The Greatest Hits CD,
called THE BEST OF EMF: EPSOM MAD FUNKERS, featured 2 discs: the first had a
collection of singles and fan favorite album tracks, along with 2 brand new
tracks: “Incredible” and “Let’s Go.” The second disc had popular remixes.
The band were primed to write new material and tour more extensively but the
sudden passing of bassist Zac Foley on January 2, 2002 shocked the band into
silence. The remaining 4 original members spent several years focusing their
time on personal projects and their families.
The band reunited at a private function in 2007 which lead to a string of live
shows in 2007 and 2008. Then in 2012, EMF decided to perform some shows
again which honored their smash hit debut album. The year closed out with the
band playing SCHUBERT DIP and STIGMA front to back at a hometown show in
Gloucester, England. That show was filmed and produced into a live Bluray/DVD
combo called LONG LIVE THE NEW FLESH.
2016 marked the 25th anniversary of SCHUBERT DIP. The band once again hit
the festival circuit and played to thousands of loyal fans in person and
broadcast live via social media.
Please contact Nick Mander at manager@emf-theband.com for more
information.