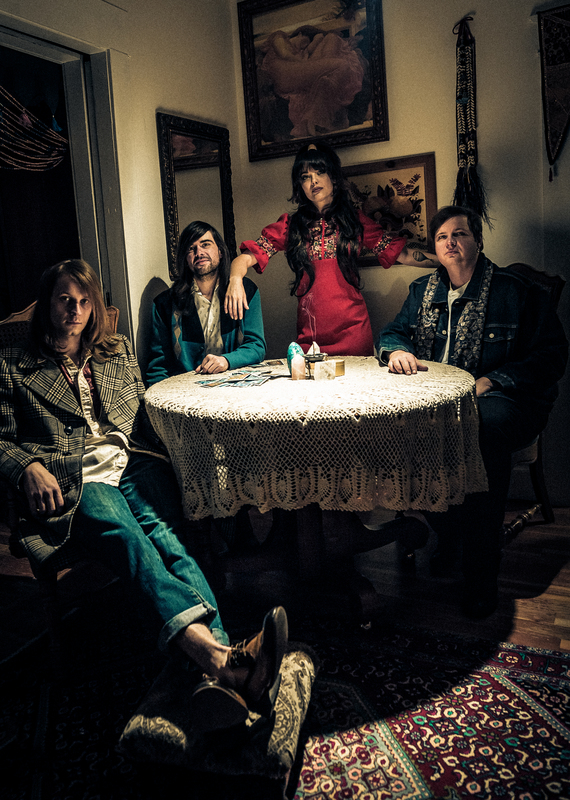 Alt pop
Formed in 2016, Amadians distill the best components of music new and old into the sort of songs that not only get inside your bones, but also awaken that primal urge inside us all to just cut loose. Captured fully on their self-produced debut release, which is packed full of melody-heavy tracks that couple sultry pop vocals and rich layered harmonies with shimmering funk guitars, shiny synths, syncopated drumming and bright, nostalgia-inducing horns, Amadians serve up a sound that revels in the groove of decades past and yet feels appetizingly dissimilar.

“Courtney and I have been writing together for years ”, says guitarist James Roth. “When we first started out, we didn’t really have an intended sound or something we were aiming for. I guess we just kept writing until we found our niche. When Ian and Kyle entered the picture, we really tried to allow ourselves to flow in the direction that our group creativity led us, and that always seemed to include a touch of old and a touch of new.” The album with pre-production assistance by Matt Schellenberg (Royal Canoe) and engineered by Evan St. Cyr sees Amadians serving up a sound that revels in the groove of decades past and yet feels appetizingly dissimilar. (We said this exact thing in the last paragraph, cutting this out or saying we have discovered a sound that is familiar yet unique is what I would do)

What really gives Amadians their particular shine is the stark contrast that exists between that distinct feel-good vibe and the often-weighty subject matter of their lyrics. Whether it’s considering forbidden love and racial prejudice (“Ocean & Moon”), the twisted way in which we sometimes thrive in the chaos of dysfunctional relationships (“Speak Low”), or that brewing desire that so many of us have to just call bullshit on the whole thing (“Wasting Time”) and raise a little hell from time to time (“Further”), there is a substantiality to this band’s lyricism that not only embodies the unhinged atmosphere of this era, but when also positioned against a backdrop of infectious backbeats, makes things feel a little less heavy, even if only for a little while.

In an age when fake news, apocalyptic forecasts, and click bait and switch headlines have become an accepted part of daily life, we as a society are living in paranoid times. Half-baked, wide awake, and marinating in our own depression, it’s easy to feel hopeless and spiritually homeless in a world that often seems abysmal and like it might implode at any time. As our desire to escape it all increases and our need for connection beyond the synthetic realm begins to bloom, bands like Winnipeg-based alt-pop group Amadians remind us that no matter
how wild or wicked things get out there, on the dance floor, we’re all just humans.