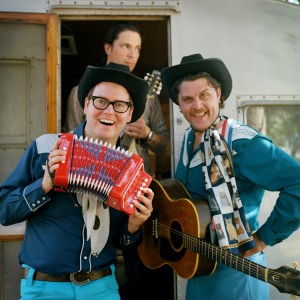 The Johnson family legacy is failure. And though they tried hard singing brother act Milo and JohnnyJake are staring that reality in the face, years of work propelling them no farther than singing corndog jingles at the roller derby. They have just one last hope: The Nashville Sing-A-Ling contest. If they can win that they’re on the road to the big time. And so the brothers pack up their vintage Winnebago and set off on a cross country odyssey praying that maybe, just maybe, the spirit of Kenny Loggins can help them out.

With an acting career spanning decades and over a hundred roles veteran character player Jon Gries – you probably know him best as Uncle Rico in NAPOLEON DYNAMITE – takes the director’s chair for the first time with PICKIN’ & GRINNIN’, a film blessed with the same sort of bumbling charm that made NAPOLEON such a hit. Anchored by the real life musical comedy duo of Johnny Dowers and Garret Mathany with guest appearances by Kenny Loggins and ZZ Top’s Billy Gibbons, PICKIN’ & GRINNIN’ makes its first Canadian appearance at CMW after picking up a fistful of awards on the US festival circuit. 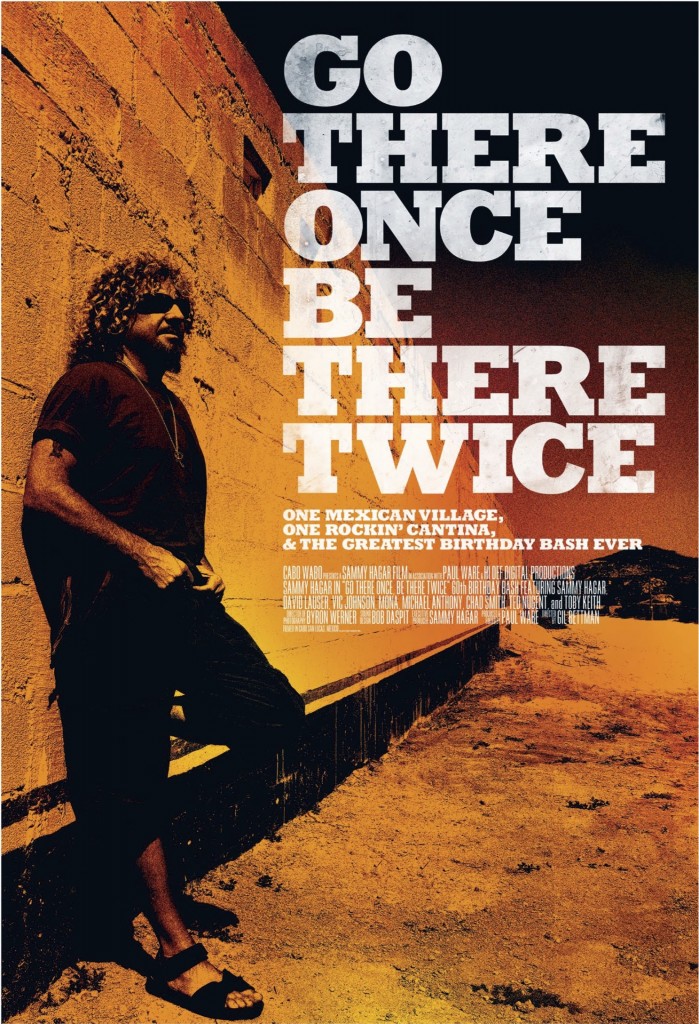 It’s not just any club that has a movie made about it for its twentieth birthday. That honour belongs to the Cabo Wabo, the brainchild of former Van Halen front man Sammy Hagar. Built when Cabo San Lucas was just a town of six thousand people the Cabo Wabo has become an anchor of the now-thriving resort town in no small part due to Hagar’s hard work and his annual birthday bash hosted at the Cabo Wabo every year.

It’s impossible to talk about the club without talking about its creator, really, and GO THERE ONCE, BE THERE TWICE is as much Hagar’s story as the club’s, the film walking through the rocker’s life and career with an impressive collection of live performances by and tributes from the scores of famous friends Hagar has hosted in his club’s walls. And when all is said and done perhaps it’s the iconic Neil Young who sums the whole endeavour up best, pointing out that “He’s got his own club in Mexico, you know. This guy likes to have a good time.” Indeed.

PLEASE NOTE: Sammy Hagar will be present to introduce the screening.

The Who invade Canadian Music Week with rare theatrical screenings of TOMMY and QUADROPHENIA back to back on Friday, March 11th. Both films will be screened from 35mm prints. 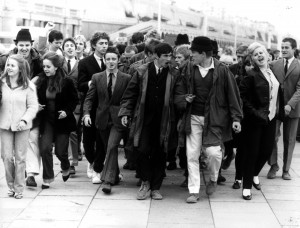 Up first is QUADROPHENIA, director Frank Roddam’s 1979 feature film produced under the watchful eye of Pete Townshend and the rest of the band. One of the all time classic Mod-era crime film QUADROPHENIA’s biker gangs trade in their Harley’s for Vespas and leathers for stylish suits in this story of angry youth rebelling against authority. Watch out for Sting in his first acting role.

Don’t miss this rare chance to see both of The Who classics on the big screen! 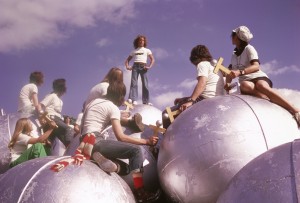 Next? TOMMY, Ken Russell’s original 1975 film version of the classic rock opera. The story of a deaf, dumb and blind pinball wizard is well known at this point and this is the film that kicked it into the mainstream with a cast that features a staggering list of names: Oliver Reed, Ann-Margret, Elton John, Jack Nicholson, Tina Turner, Eric Clapton and, of course, all the members of The Who.

For one brief, shining moment in 1976 Dr Feelgood were the biggest band in Britain. Somehow four kids from Canvey Island – a below-sea-level island mostly notable for its large oil refinery – had risen through the pub rock scene of the early 1970s to build a loyal, rabid following that culminated with the release of number one album Stupidity. This, of course, led to the band splintering and the departure of lead guitar player Wilko Johnson.

More than thirty years later director Julien Temple – JOE STRUMMER: THE FUTURE IS UNWRITTEN, GLASTONBURY, THE FILTH AND THE FURY – chronicles the rise of the four boys from Canvey with all the crackling energy and style that we’ve come to expect from the man widely considered the best rock and roll documentarian on the planet. OIL CITY CONFIDENTIAL starts from their unusual hometown and childhoods, building through to the splintering of lifelong friendships at the peak of their success, with Temple presenting it all in insightful and wildly entertaining fashion.

Canadian Music Week is proud to welcome Israel’s leading alternative rock act Eatliz to the festival as they take part in their first ever North American tour and we are just as proud to present the music video for their new single LOSE THIS CHILD.

Beautifully animated in stop motion using sand sculptures that needed to be shaped and reshaped for every frame shot, it’s a fantastic piece of work from directors Merav and Yuval Nathan.

LOSE THIS CHILD will precede our screening of Vincent Moon and Efterklang’s AN ISLAND. 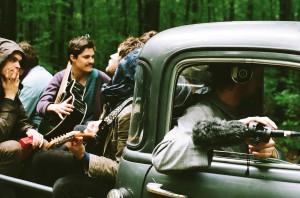 A collaboration between filmmaker Vincent Moon – Director of Mogwai’s BURNING and The National’s A SKIN, A NIGHT – and Danish musical act Efterklang, AN ISLAND is a most unusual creation.

Not quite a documentary, not quite a performance film, AN ISLAND is meant to be a sort of visual album with Moon, Efterklang and roughly two hundred collaborating musicians, children and parents chipping in to re-interpreted versions of Efterklang’s most recent album MAGIC CHAIRS. Shot over the span of four days on a remote island off the Danish coast AN ISLAND is a celebration of the creative process, of the unique power that exists when a group of talented people join forces in support of a larger goal. And, also, the music is really damn good.

Prepare yourself for a psychedelic head trip of the highest order with Panos Cosmatos’ BEYOND THE BLACK RAINBOW. The accomplished music video director – he’s done work for The Handsome Furs, among others – plunges the audience into a sort of sensory overload as he fuses elements of Reagan-era paranoia, social engineering run amok, and a drug fuelled step up the evolutionary ladder to create a hypnotic experience that plays out like a Tarkovsky style science fiction picture as filtered through the visual style of LOGAN’S RUN. Black Mountain’s Jeremy Schmidt contributes an original score composed entirely on vintage analog synthesizers that proves an integral part of the experience. Smoke ‘em if you got ‘em and just let it all wash over you.

At some point in 1989 Cambridge, Massachusetts band Treat Her Right would morph and twist until it became Morphine. Behind the driving force of bassist-singer Mark Sandman, Morphine would become regarded as one of the most unique and compelling bands in the exploding alternative rock scene. A three piece act made up of drums, sax – often two played simultaneously – and Sandman on his two string bass, Morphine would pioneer a sound termed ‘low rock’ by the band, a sound that never existed before or since.

On July 3rd, 1999, at the peak of Morphine’s success, Sandman would collapse on stage in mid-performance. The horrified audience at the Palestrina Festival in Italy could do nothing but watch as Sandman was taken away by paramedics and pronounced dead. One of rock music’s most unique talents was gone, without warning, at the peak of his career.

Consider CURE FOR PAIN a fitting tribute to the man and his art, a riveting and tragic exploration of an intensely private man whose life had been marked by tragedy from his earliest days. Combining concert footage, archival interviews and new interviews with peers including Les Claypool, Mike Watt, Ben Harper and Josh Homme – whose Queens of the Stone Age had to play the next set at the festival following Sandman’s collapse – CURE FOR PAIN captures Sandman as an artist, a friend and a son.

PLEASE NOTE: Director Rob Bralver will attend the screening to introduce the film and take questions. YEAR OF THE BONE will precede our screening of MUSIC.

One third of an ambitious multi-media project that also includes a book and an iPad app, Andrew Zuckerman’s MUSIC is built on such a simple premise that it’s shocking nobody has done it before: Take a group of prominent musicians of all different styles and disciplines and ask them a series of simple questions.

What is music to you, what is its power, and how do you create it?

The results are fascinating as a string of musical icons deliver their answers, most of them quite profound, and patterns begin to emerge. What becomes clear is that whatever form it takes – whether punk rock of classical composition – all musicians speak a common language and draw from a common well. Music, clearly, is universal.